The Beard Up Boys have raised over $130,000 for BrAshA-T since the campaign was started by Scott Robson in 2015, who wanted to help his mate, Craig Muddle, who has 2 children with A-T.

Each year, participants commit to growing a beard throughout winter (1 June – 31 August), with the campaign ending with a Big Shave Off on the last weekend in winter, including BBQs, raffles and entertainment. 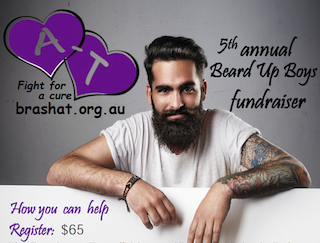 Friends, family and BrAshA-T supporters are encouraged to generously sponsor the Beard Up Boys. Registration for the beard growers is $65 with an additional $50 penalty if the beard is shaved-off before the Big Shave Off.

Scott, Craig and their community have been so generous in supporting our fight for a cure, and we would love to see their campaign expand beyond the foothills of the Blue Mountains where they live.

You may consider supporting this campaign by becoming a Beard Up Boy either individually or as a workplace, by sponsoring the Beard Up Boys, or by donating raffle prizes for the Big Shave Off.