My name is Kristine Roebig and my husband Sean and I have 3 children. Stacey who is 7 years old, followed by Brady who is 3 years old and Ashleigh who is 2 years old. Our two youngest children were diagnosed on the 1st February 2007 with a disease called Ataxia-Telangiectasia.

For your information the following is our family’s story……… 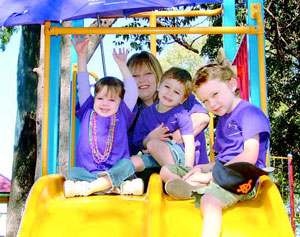 When Brady was about 14 months old we began to notice that his stumbling was not consistent with other children of a similar age. We had a referral to a Paediatrician who ran a series of blood tests and an MRI scan of the brain under general anesthetic. Within two weeks Brady was taken to the Emergency Room at St Andrews Hospital. He was discharged three days later and then re-admitted 3 days after this with pneumonia.

Brady was started on daily steroid treatment and lots of other medication. This was the course we followed for the next 12 months, repeated pneumonia and admissions to hospital. I

n October 2006, Brady was referred to the Royal Brisbane Children’s Hospital. Brady had a broncosopy and CT scan of his full chest. On results of this testing doctors were astounded by the state of Brady’s lungs and the damage that had been done. He started on a drug called azithromycin for long term use. Along with the other symptoms Brady presented with, referrals to other specialists were made and more tests ordered.

On the 1st February 2007 we were given the diagnosis of Ataxia-Telangiectasia. 7 days later Brady had his first immunoglobulin transfusion. His little body does not produce anti-bodies so he will have to have these transfusions every 28 days for life.

Then we were asked the question of how are your other children. We answered that Ashleigh stumbles too. Ashleigh went through the same testing process as Brady and had the same results. She has not started having the immune problems yet that Brady has.

Having two children with such a terrifying disease has brought many life changes throughout our family. The added financial / emotional strain is very difficult added to the stress of a diagnosis of this kind.

As AtaxiaTelangiectasia is such a rare disease, (approx 40) diagnosed children in Australia, families feel very isolated and alone. Our goal is to change this for families and let them know they are not alone and someone is fighting for their children’s future. As there is no support of this kind available, all children with A-T including Brady and Ashleigh need our help.

Sadly Sean Roebig, one of BrAshA-T’s founding members, loving husband to Krissy and devoted father to Josh, Stacey, Brady and Ashleigh passed away on the 22nd of January 2011.

I wish we could have found a cure for A-T in Sean’s life time but I will continue to push ahead for a cure in Brady and Ashleigh’s life time. BrAshA-T is a legacy that Sean has left behind to be continued…

BUT as hard as all of these things will be it will happen because Sean had faith in me from the day he met me. He loved me. We will be ok…